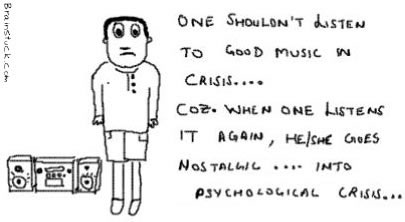 This is a dark version of the cartoon I made for newsletter of Gymkhana Club(India).It is about Pankaj Udhas‘s (a renowned ghazal singer) concert that the club organised on the new year’s eve.

The cartoon is called “Guzzling with Ghazals”, because, while Pankaj Udhas was singing, people were actually guzzling alcohol that night to get themselves in a musical mood.